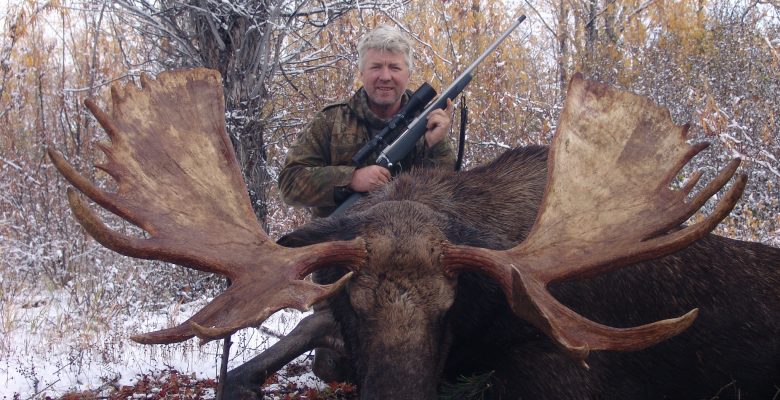 With approximately 500,000 animals, Russia moose population is second only to Canada. Moose is widely distributed across the entire 11 time zones and is represented by several subspecies.

European moose is the most common subspecies. It is found in the Western (European) part of the country, Ural mountains, and in the

Western Siberia. The density of the population is highest in the  Western regions of Russia, however, better trophies are usually found in the Siberian regions and in the Northern Urals, where males can exceed 500 kg (1100 lbs). Hunting is conducted either during the rutting season by calling, or during driven hunts in late season in the regions with well a developed road system. Driven hunts frequently offer an opportunity to take more than one trophy as well as other trophies found inside of the drive: wild boar, wolf, lynx, roe deer and others.

Insurance of any kind; International and domestic travel before and after the hunt; Preparation, shipping, or transporting of trophies from Russia; Cost of sightseeing tours; Ground transportation unrelated to hunting; Gratuities.

Russian European moose population does not have as high density as other European countries, like for example, Sweden, but Russia offers by far better trophies. The usual trophy is similar to Canada moose found in Ontario and Quebec. The temperature can range from 0 to +15° C. Hunters should bring waterproof tall boots, gloves, and camo silent clothes. Brown bear can be added during the first half of September. 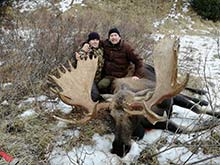 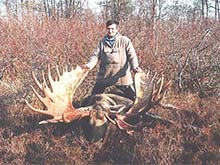 Reception and assistance in Petropavlovsk airport; Accommodation in the hunting area;
Meals and soft drinks during the hunt; Transportation during the hunt; Services of 1 guide per hunter; Services of 1 interpreter in a camp; Field trophy preparation; Gun permit; Invitation letter and voucher; Hunting license; Trophy export permit;1 bull.

Insurance of any kind; International and domestic airfare; Hotel in Petropavlovsk before or after the hunt; Conservation, shipping, or transporting trophies from Russia; Cost of sightseeing tours; Gratuities.

Kamchatka moose (Alces alces buturlini) is one of the largest moose subspecies in the world. Kamchatka moose is genetically identical to Chukotka moose. The population of Kamchatka moose is close to 6000 and it is getting larger. The camp is located south of 15,000 ft. Kamen volcano, and north of a large federal wildlife preserve. Hunt is conducted by spot and stock only. Later in the fall season, with the foliage down, spotting moose above the brush becomes easier. Hunters should expect to spend 2-3 days at a time away from the base camp, staying overnight in hunting tents or shacks. Rains are common, sometimes keeping hunters inside of cabins for a few days.

This is a large moose, populating immense tracts of Eastern Siberia, mainly in the Yakutia region. It is as large as moose found in British Columbia with males sometimes weighing over 600 kg (1300 lbs) and antler span in excess of 130 cm. (52 inches). The hunting terrain is difficult, but the high population density makes this hunt very interesting and highly successful.

Amur moose is also called Ussury moose. This moose is the smallest moose subspecies in Asia. The most striking feature is disproportionately small antlers which have very few palmations. It is found in the forests of Far East Russia. This part of Russia has the most diversified wildlife and plants in Russia. The Siberian tiger and leopard are just a couple examples. Hunts for Amur moose are usually conducted either by calling or by stalking.

Chukotka and Kamchatka moose are genetically identical subspecies. The correct name of these subspecies is Kolyma moose. This is the largest moose in Russia and perhaps in the world.It is found in the Kolyma river basin of the Chukotka peninsula, parts of the Magadan region, and the Kamchatka peninsula, where it was introduced several decades ago. The giant moose is a truly magnificent animal. Males can weigh as much as a ton with record trophies antlers spanning more than 180 cm (70 inches). Chukotka Peninsula and Magadan region are challenging destinations to hunt moose due to unpredictable weather and extreme remoteness. However, the quality of the trophies overwhelmingly outweighs all the difficulties. Kamchatka moose hunting has become one of the most popular moose hunts in Russia in part due to its more accessible moose habitat than in Chukotka. Hunts are done by stalking, calling, and sometimes on rafting expeditions.