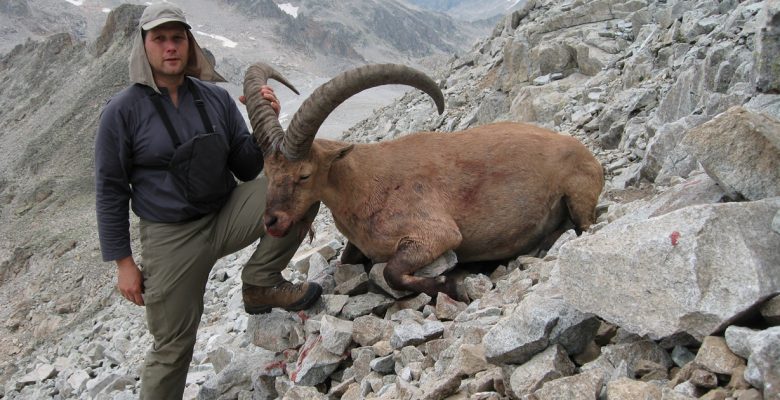 Many serious mountain hunters consider Caucasian tur as the must to have trophy. Sergei Shushunov and Russian Hunting Agency will organize hunt for this unique animal. Caicasiona tur is found only along the ranges of Caucasus mountains, at altitudes between 1000 and 4,000 meters (3,300-13,000 ft.). With it’s distinct look it resembles both, a goat and a sheep and is classified as a goat antelope. Tur is a nocturnal animal, eating in the open at night and sheltering during the day, usually in almost inaccessible places. Females live in herds of around ten individuals, while males are usually solitary.

The West Caucasian (Kuban) tur is found in Russia. This tur has a chestnut coat with a yellow underbelly and darker legs. The horns are scimitar shaped and heavily ridged. Hunting is extremely difficult due to high elevations and very precipitous terrain, which precludes use of horses for the most part of the hunt.

The East Caucasian (Dagestan) Tur is found in the Russian republics of Dagestan and Northern Ossetia as well as in Azerbaijan. It has somewhat smaller, but otherwise has a body similar to Kuban tur, usually with larger, lyre shaped horns. Dagestan tur hunting is usually somewhat easier than hunting Western tur.

Mixed (Severtsov) tur is a true naturally-occurring cross between the Dagestan (Eastern) and Kuban (Western) tur. The horns of some animals tend to look almost exactly like either the Eastern or Western tur, or anywhere in between. Hunting for this tur subspecies, found only in Russia is as hard as hunting for Western tur.

All three tur subspecies can be hunted in Russia on one trip, if time allows. Caucasian chamois can be added as a secondary trophy in Russia and Abkhazia. Chamois can’t be hunted in Azerbaijan. Shooting over a distance of 200-300 meters (220-330 yards) is common. Hunting camps are located at altitude of up to 2500 meters (8000 ft.), and approximately 4-6 hours traveling from the airport. Transportation to spike camps from base camps is done either on horseback, or on foot. This is one of the most difficult mountain hunts in the world. The hunt takes place at an altitude of about 2800 to 4000 meters (9500-1300 ft.) and is physically demanding due to very steep, rocky and precipitous slopes. Two areas: Krasnodar region of Russia and Abkhazia, a newly independent tiny country sandwiched between Russia and Georgia offer opportunity to hunt Western tur at elevations several thousand feet lower than in other parts of Russia