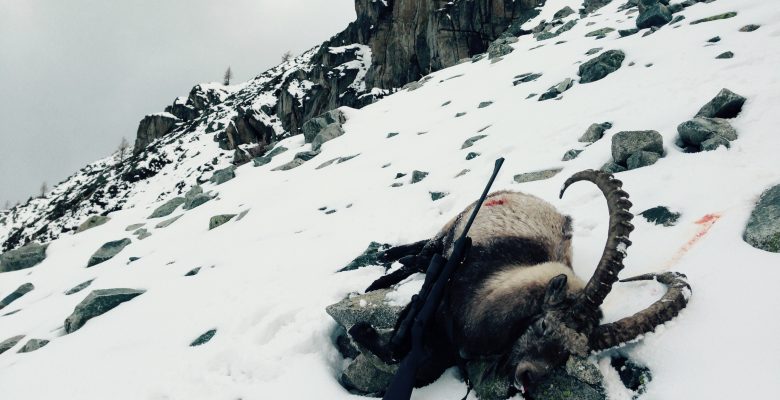 Siberian ibex hunts is one of the most exciting hunting trophies in the world. Siberian ibex, also called Asian ibex inhabits mountains of central and Southern Asia. It is found in Afghanistan, western and northern China, north-western India, south-eastern Kazakhstan, Kyrgyzstan, Tajikistan, eastern Uzbekistan, in Mongolia, northern Pakistan, and south-central Russia. Sergei Shushunov and Russian Hunting LLC offer hunts for Siberian ibex in Krasnoyarsk and Altai regions of Russia, as well as in Kyrgyzstan, Kazakhstan and Tajikistan. There are several subspecies of this magnificent animal, different mainly in size and color.

Altai ibex is found in Sayan and Altai mountains of Mongolia, Russia and Kazakhstan, with trophies having horns anywhere between 90-120 cm. Hunting is difficult due to steep and rocky terrain. Siberian ibex was first described in the Siberian part of Altai mountains, giving a bit of confusion due to the name overlap.

Gobi ibex is found only in Goby mountains of Mongolia. This is the smallest of siberian ibex. The hunt is easier than for other subspecies of ibex. Usual elevations are about 2000-2500 meters (6500-8000 ft.)

Mid-Asian ibex, also called Tyan Shan ibex is the biggest subspecies and also the most numerous. It is found in several countries. Mid-Asian ibex lives at very high elevations in Kyrgyzstan and at lower elevations in Kazakhstan. Horses, extensively used on ibex hunts, offer a lot of help. We organize mid Asian hunts in mountains of Kyrgyzstan, Kazakhstan and Tajikistan. The best ibex can be found in Kyrgyzstan, where trophies may have horns in excess of 130 – 140 sm. (51-54 in.). 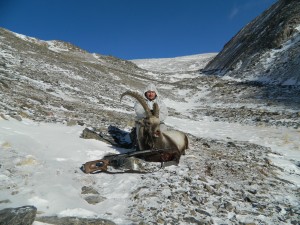 Ibex hunters must be in reasonably good physical condition, should be able to travel extensively on horseback and climb to elevations up to 4000 meters (14,000 ft) and higher when hunting in Kyrgyzstan, to 3500 (12,000 ft) meters when hunting in Kazakhstan and 3,000 meters (10,000 ft) when hunting in Russia. Shooting distance is usually around 300 meters (330 yards) but the shots at 400 meters and more are sometimes required.