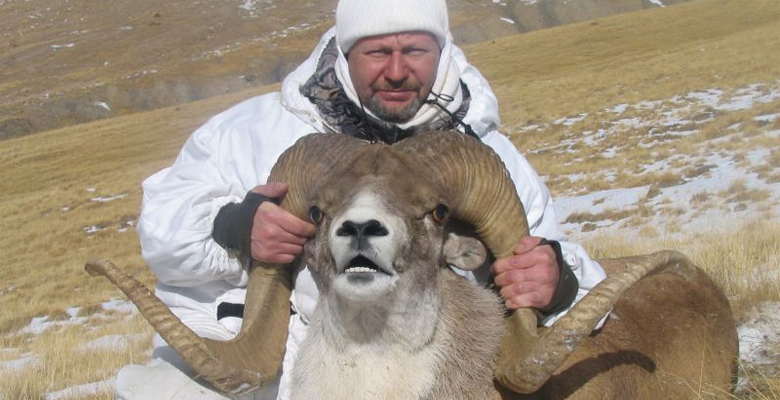 Sergei Shushunov and Russian Hunting LLC offer Marco Polo and other argali sheep hunts for discriminated mountain hunters. Argali is the largest and the most magnificent sheep in the world. Several subspecies of argali are found on the territories of Russia, Central Asian Republics, China and Mongolia. Hunting Altai argali sheep in Russia is prohibited.

Marco Polo argali, the largest among all subspecies – in Tajikistan and Kyrgyzstan

Argali sheep being the largest and having the widest horns span is the most magnificent wild sheep in the world. Argali is found on altitudes between 2,500 to 5,500 meters (7,500-16,000 ft.). The hunt is relatively easy physically for Gobi and Altai argali, which are found at lower elevations. The hunt for Marco Polo argali in Kyrgyzstan and especially Tajikistan can be very demanding due to very high elevations. Physical conditioning several weeks in advance of the hunt is strongly recommended. Stalking argali sheep requires a great deal of patience. Shots are usually taken from distances of 200 to 500 meters (320 to 550 ft.) and occasionally beyond. A significant advantage is familiarity with handling a horse. Local horses are easy to handle and well adapted to high altitudes. Travel on horseback enables one to cover longer distances, with less physical pain, in search of the perfect ram. Strict regulations by local governmental and international agencies allow the Argali population to remain stable. The limited number of licenses a year are issued for Marco Polo argali and Karelini argali hunts, and licenses for Karaganda, Littledale and Karatau argali licenses are issued extremely rarely, not even every year and in single numbers.
The largest among argali sheep is Marco Polo and the best trophies, reaching 60 inches and more are found in Tajikistan, where a hunt is very hard and for many unprepared hunters is almost impossible due to extreme elevations. For price-conscious hunters, Arpa river valley of Kyrgyzstan offers an opportunity to get a 60-inch trophy at the fraction of the cost of the Tajikistan hunt.

For more information on argali hunting, including Marco Polo hunts, please visit www.argalihunt.com, or contact Sergei Shushunov at this site