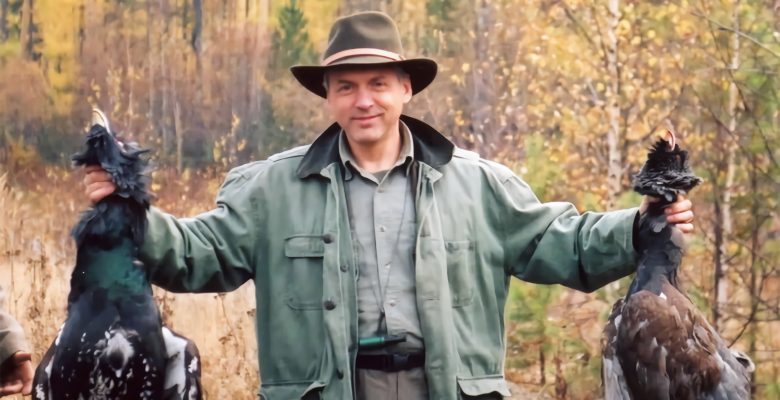 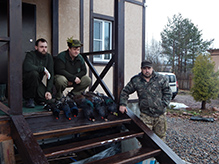 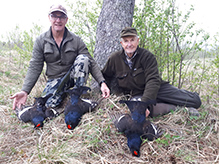 Insurance of any kind; International and domestic travel before and after the hunt; Bird skinning; Preservation, shipping or transporting of trophies from Russia; Cost of sightseeing tours; Ground transportation unrelated to hunting; Gratuities.

Capercaillie and black grouse is as plentiful in Russia today as it was in Europe hundreds of years ago. Capercaillie, the largest bird from the grouse family is very elusive. Stalking a capercaillie may require some practice. If you are unfamiliar with this hunt, our guides will explain all the tricks. Still you may need to make more than one attempt. The temperature can range from –10C to +15C (10F to 60F). Trophies must be either frozen, or skinned by a taxidermist. Bring a pair of rubber hip boots, warm gloves a hat and a waterproof, quiet jacket. Hunters should be prepared to face a major sleep disruption, because capercaillie hunt starts around midnight and black cock just before sunrise. Hunters who have enough energy could hunt woodcocks during the evening mating flight. 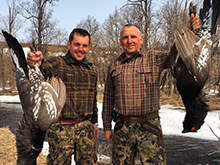 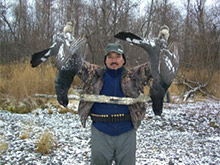 Insurance of any kind; International and domestic travel before and after the hunt; Bird skinning; Preservation, shipping or transporting of trophies from Russia; Cost of sightseeing tours; Ground transportation unrelated to hunting; Gratuities.

Black billed or Western capercaillie hunt is done by stalking along the roads during the winter season and on the lek during the spring season. Unlike western capercaillie, which loses hearing during a particular part of mating song, Eastern capercaillie maintains good hearing at all times, making stalking very difficult. Bringing winter clothes in layers is important to adjust to any air temperature.

The objectives and rewards of hunting in each of these seasons are very different. While spring is the ideal time to get a trophy bird in prime plumage (usually the ultimate goal of bird collectors), the fall hunt, on the other hand, is when the birds harvested on a hunt taste at their best and the ideal time for hunting with dogs.

Our spring combination hunt for capercaillie, black grouse, and woodcock is one of the most exciting and rewarding trophy bird hunts in all of Russia. All three species of birds are as plentiful in Russia today as they were in Europe hundreds of years ago and have a particularly high concentration in the northern regions of Russia—St. Petersburg, Karelia, Novgorod, Vologda, and Kirov, amongst others—where our hunts take place. As such, the chances of enjoying a happy and successful day’s hunting are extremely high.

Before coming to us many hunters make several unsuccessful attempts to hunt in Sweden, where spring hunts are prohibited. To avoid the disappointment of a foiled or failed hunt, we’d highly recommend you learn from their experience. Take a leaf out of the books of the countless clients who have saved their time and money by booking a capercaillie and black grouse hunt with Sergei Shushunov in Russia, where hunting for these species is not only legal but takes place in a more scenic environment where the birds are far more abundant than elsewhere.

The Capercaillie, the largest bird of the grouse family, is very elusive, and stalking it may require some practice. If you are unfamiliar with this type of hunt, our guides will be on hand to explain all the tricks of the trade in order to maximize your chances of a successful hunt.

Capercaillies return repeatedly to use the same part of (predominantly) pine forest as a lek each season and have done so, presumably, for hundreds or even thousands of years. Our guides know the location of the most frequented leks and treat this knowledge with the utmost secrecy, passing it on from generation to generation. This insider knowledge, of course, ensures that your hunt won’t come into contact with other hunting parties and be spoiled by the ‘friendly fire’ of other hunters competing for the same prize. A shotgun shot often stops the birds from singing and, in some cases, even mating, therefore our guides try not to hunt the same lek on successive nights in order to allow the birds to recover from stress and return to their usual habits. Every season guides have to estimate the number of cocks on the lek in order to maintain a certain minimum. It is believed that a lek with less than 5 cocks makes it less attractive to females and, consequently, the lek may cease to exist.

During the spring season, the western capercaillie is hunted after midnight by stalking, usually in late April and early May. The cock, which otherwise has very acute hearing, becomes deaf for seconds at a time, while making its nocturnal and early-morning mating calls, thereby allowing the hunter to make two or three silent steps in the direction of the bird and eventually approach to within 20-35 yards to place a reliable shot. The bird—whose mating calls are very muffled and take some practice to identify—may stop singing for some minutes or even as long as half an hour while surveying the terrain from a treetop for predators and or other threats. This being so, exercising patience and remaining perfectly still during this time is crucial—the slightest noise or movement can spook the bird and cause it to take off with a sound reminiscent of an exploding hand grenade, which may serve as a warning to remaining birds on the lek and so mark an end to the hunt in that particular location. This hunt must be completed before daylight, so that approaching hunters remain unseen by their prey.

The fall season hunt is less stimulating and challenging but is still a gratifying experience for those who enjoy hunting with dogs. Like all species of grouse, at this time of year, capercaillie can be found along forest roads or river beds picking gravel at dawn, thereby allowing hunters to approach to within 30 to 50 yards to place a shot. Later in the day, birds can also be hunted with pointing dogs in the pine forests. In light of this seasonal variation in the birds’ habits, we would recommend a spring hunt for those looking for a challenge and the best trophy and a fall hunt for dog hunting, or those who prioritize a high kill count over the “thrill of the chase,” so to speak.

Unlike the western, Eastern capercaillie maintain excellent hearing during the spring mating season, even when making their mating calls. As such, hunters must crawl in absolute silence to approach the bird and to arrive within reasonable shooting distance. This makes for a true test of your skills as both a shooter and a stalker but also, enhances the thrill of the hunt.

Black cocks are hunted in the spring just before sunrise, from a blind positioned close to a lek, or the grouses’ “booming” grounds, where dozens of cocks may gather. The spectacle of fighting cocks is truly something to behold, and past clients have all greatly appreciated the opportunity to witness the male birds’ rarely observed courting and mating displays. Observing the phenomenon of the perfectly colored black, white and red plumage of fighting cocks in the soft light of the rising sun is the sort of memory that lasts a lifetime.

Black grouse leks move from year to year, and are usually found in open spaces such as pastures, hay fields, and cranberry bogs. The oldest cocks in a particular population select the new location for the lek. They start practicing their mating song about a month before mating begins, which brings the rest of the birds to the new lek. Once the lek is located, the guide builds a blind from local, natural materials—freshly cut small fir trees, branches, foliage, etc.—and lets birds to get used to it, which takes about a couple of weeks. Afterwards, any change to the blind will be treated by the birds with suspicion, potentially causing them to relocate the lek a few hundred yards away and thus making the hunt impossible from the constructed blind.

During the mating season, female black grouse come to a lek before the males. They do so when it is still dark in order to act as lookouts and then wait for their turn to mate. The black grouse mating song can be heard from over a mile away and during the mating season males become very complacent and even somewhat careless, so much so that a shotgun shot may stop them from singing for only a brief period of time.

Woodcock hunting in spring is considered a “bonus” hunt on top of the regular, morning shoots for capercaillie and black grouse. Hunting woodcocks in the spring is an amazing experience, unmatched by any other upland bird hunt we know of. In the evenings, male woodcocks fly through the open spaces in the forest—roads, meadows and river beds—looking for females. Due to their very erratic flight patterns, they make for particularly tricky targets to hit and so pose a true test of the huntsman’s shooting skills.

While the focus of the hunting day is on capercaillie and black cocks, these are hunted at night and in the early morning. Woodcocks, however, are hunted in a short shoot of 45-60 minutes just before sunset, thereby leaving the daytime free to rest, sleep, and recharge our batteries.

Capercaillie, black grouse and woodcock can all be hunted in the fall with bird dogs. While our spring hunts are dedicated trophy hunts, those in fall are specifically designed and programmed for hunting with dogs.

For more on bird hunting in Russia, please read “Grouse of Another Time” by Chris Dorsey, a first-person account of a Russian capercaillie hunt organized by Sergei Shushunov and his team.

TO GET INFORMATION ABOUT OUR CAPERCAILLIE HUNTING TRIPS
Call Sergei at 1-847-962-1858 or e-mail sergei@russianhunting.com.
Next expeditions are scheduled for April-May and August-September.