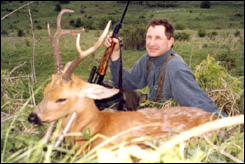 Siberian roe deer is a close relative of European roe. The principal range of the Siberian roe deer lies in Asia, from the eastern foot of the Urals to the Pacific Ocean. The largest trophies are found on the South-western slopes  of Ural Mountains. The smaller North Caucasian form is geographically isolated on the lower northern slopes of the Caucasus Mountains.
The typical Siberian roe deer is considerably larger than the European roe deer and weighs up to 60 kg. (130 lbs.). The winter coat is grayish-brown with a white rump patch, and is much thicker and rougher than in the European roe. The antlers are considerably larger than European roe, averaging close to 700 gr. (1.75 lbs.) and sometimes exceeding 1400 gr. (3 lbs.). The antlers are heavily pearled and grow upward in the shape of a “V” and are widely separated at the base, with the coronets never touching as they do in the European species. Typically there are three points to a side, and occasionally four points. The North Caucasian variety of Siberian roe deer is smaller, described as intermediate in size between the European and Siberian forms. Males reach a maximum weight of 40 kg. (88lbs.).
Hunting is organized in the Russian provinces of Krasnoyarsk, Khakassia, Tuva, Altai, Krasnodar Chelyabinks and Kurgan, as well as Kazakhstan and Kyrgyzstan from the 25th of August to the 20th of October. Rutting time runs from August 25 to September 15 and it is the best time to hunt. All hunting is done on foot with transportation to the hunting area by jeeps or horses. Spot-and- stalk is normally used, most of the time, with occasional calling. Hunting terrain is not difficult and hunting can be combined, depending on the area with moose, wolf and upland birds. Unlike European roe, which is most often hunted from high stands,  giving hunter an opportunity to look at the deer form above and at a relatively short distance, Siberian roe is hunted in a open terrain covered with tall grasses and without landmarks, making it difficult to reliably estimate a trophy quality.