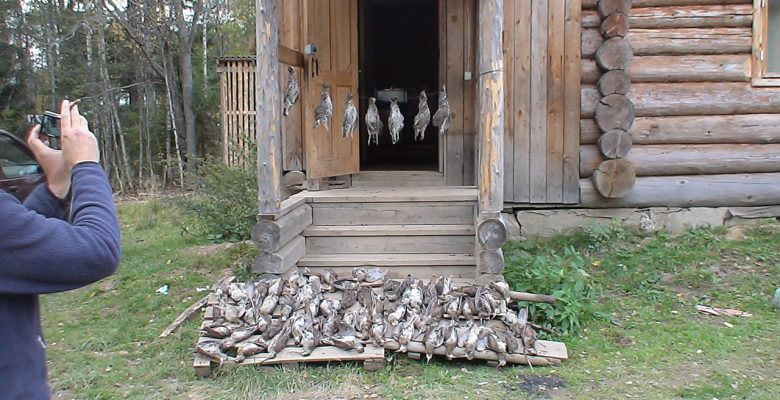 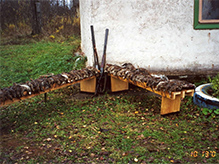 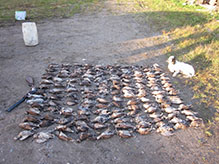 Reception and assistance in St. Petersburg airport; Accommodation in the hunting area; Meals and soft drinks during the hunt; Roundtrip ground transportation airport-hunting area and transportation during the hunt; Services of 1 guide per hunter; Services of 1 interpreter in a camp; Gun rent and ammo; Invitation letter and voucher; Hunting license; Trophy export permit; Unlimited woodcocks.

Insurance of any kind; International and domestic travel before and after the hunt; Preservation, shipping, or transportation of trophies from Russia; Cost of sightseeing tours; Ground transportation unrelated to hunting; Gratuities.

St Petersburg region and Karelia offer some of the best fall woodcock hunts in Russia. Hunt takes place during fall migration. With good dogs during the peak season, hunters can expect to have 15-30 flashes per day. For best results, hunters should be prepared to walk up to 15 kilometers over heavily forested terrain each day. Other birds, including black grouse, hazel grouse, and snipe can be taken too. Package prices are based on hunters bringing their dogs. Our dogs can be provided for an additional fee.

Is there a more interesting game bird for an avid gun dog hunter than the European woodcock? It’s highly unlikely. The European woodcock, which is twice as large as its North American relative, is found all over Europe, North Africa, and Asia. It is in Russia, however—the nation that 75% of the European woodcock population call “home”—where one can experience the most productive and most enjoyable hunts for this utterly fascinating species.

Shooting woodcocks usually take place at close range, but this fact should not be misconstrued. Hunting woodcocks is far from easy and requires a great deal of ability on the part of the shooter. Unlike many other game birds, the woodcock is a very skillful and agile flier—darting through what appears to be the most impassable of thickets without so much as touching even the smallest of branches. To make it even more of a testy target, on its ascent the bird always tries to use a tree or a bush to provide itself with cover. A woodcock flushed on the edge of the cover, often flies just above the ground, which makes shooting at it dangerous for both other hunters and the hunting dogs. This being so, shooting a woodcock requires not only a quick response from the hunter and the ability to shoot offhand, but at the same time a great deal of care, attention, and accuracy.

In the period from late September to early November, woodcocks migrate from their subarctic breeding grounds to the warmer climes where they will spend the winter. At this time, the birds invariably gather to rest in the vicinity of open spaces, such as on the fringes of the low-growth forest, in overgrown ravines, gardens, and coastal bushes or shrubbery along the banks of rivers and streams.

The woodcock is a solitary bird, but during this migration period woodcocks frequently form small groups. The number of birds in any given group can vary significantly depending on how hard the frosts hit any specific region on their migration path. By tracing just one bird, however, we are often able to find the whole group. For ardent hunters, finding such a group during their resting periods between flying is akin to locating the proverbial pot of gold at the end of the rainbow and it is at this point that the true thrill of this hunt begins!

all over the world owing not only to the beauty of the surrounding landscape but also the sheer volume of woodcocks found in the country.

In the fall we offer excellent, no-bag-limit woodcock hunts with pointing dogs within driving distance of St. Petersburg. On the dog hunts in this region, on a good day, a hunter can expect up to 20-30 flushes per day. Our second hunt location, in the Krasnodar region between the Eastern shores of the Sea of Azov and foothills of the Caucasus Mountains, experiencing up to 50 flushes a day during the peak of the woodcock’s migration is not uncommon. Later, during late fall and winter, we also offer woodcock hunting in Azerbaijan.

The fall woodcock season in the northern parts of Russia starts in late August and ends in late October. It can be divided into two periods:

The first hunting period for local woodcocks begins when the broods have already disintegrated and the young birds emerge from the marshlands to relocate drier and more open terrain. During this time, woodcock hunting is somewhat haphazard and unpredictable. For this reason, in this period we often combine our woodcock hunts with other upland bird hunting.

In mid-September, evening bird flights to clear feeding grounds become more regular. After feeding, with the onset of dawn, the birds no longer return to the marshy thickets but stay near the clearings. At this time, the birds are most commonly located in thickets of undergrowth, on the edges of fields, pastures, meadows, and river floodplains.

At the beginning of the fall season, the woodcock is cautious, and frequently runs or takes off, not allowing dogs to get close. The closer the birds are to the time of their departure south, however, the fatter and lazier they become. During this time, the birds often hide, stubbornly standing their ground, and are less likely to take flight before the hunter is within a reliable and shooting distance. Hunting is more interesting in the morning and evening, in the hours around daybreak and sunset respectively, but can continue throughout the day, especially in cloudy weather.

The second hunting period starts with the woodcock’s mass migration. This can begin at different times depending on the vagaries of weather and whether the fall is early or late in any given year. The usual onset of seasonal precipitation in the northern and central zones occurs at the end of September. In October the intensity of the migration from north to south, naturally, increases significantly, and as such the further to the south a hunt is located or takes place, the higher the concentration of birds arriving there via the migration corridor from the northern regions will be.

Before the end of summer arrives in Russia, our thoughts have already turned to the prospect of the many joyous and successful woodcock hunts we will enjoy in the coming months. Hunting these birds not only provides the hunter with a stiff challenge to their shooting and pointing skills but also the chance to participate in the type of truly wild bird hunting that hunters in other locations around the globe can only dream about.