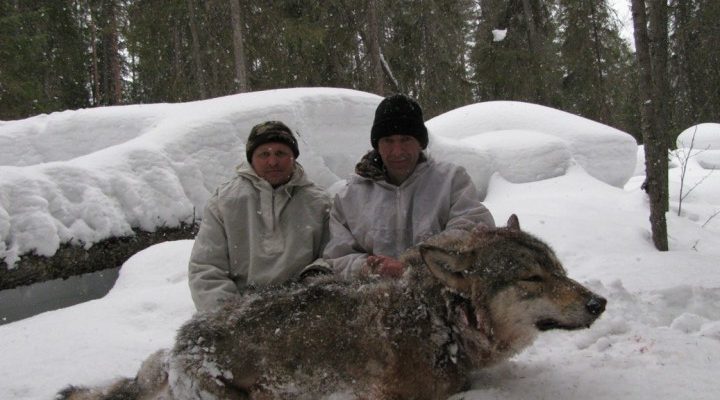 Insurance of any kind; International and domestic travel before and after the hunt; Preserving, Shipping, or transporting of trophies from Russia; Cost of sightseeing tours; Ground transportation unrelated to hunting; Gratuities; Trophy fee; CITES permit when applicable.

The number of wolves in the St. Petersburg region and Karelia has been increasing over the past two decades despite active hunting. We offer a traditional flagged wolf hunt. This requires locating a pack, consisting of 3 to 6 animals, surrounding it with a rope approximately 3.5-5 miles (5-8 km) long with a narrow opening where shooters are located, and pushing wolves towards the shooting line. Shots are taken from a short distance, usually using 12 gauge shotguns loaded with buckshot. Drives are organized every other day. Hunters should be in good physical condition, dressed in layers and wearing snow camo suites. Additionally, hunters can choose to hunt lynx or wolverine with the dogs.

Wolf hunting in Russia is as unique as it can be, and you should consider planning . Being an out-of-the closet hunter I often receive letters from well-meaning, usually European ladies in which they describe their dreams of staying in a log cabin somewhere in the wilderness (albeit with a grocery store handily located just a 15-minute drive away), sitting by a fireplace, sipping scotch-flavored coffee and listening to howling wolves. Some of these ladies appear to be angry, presumably due to the fear that wolf hunting would deprive them of this opportunity of being serenaded by one of the wild’s most misunderstood creatures.

The romantic image of wolves as gentle predators is misguided at best, and, at worst, downright dangerous.

The rather simplistic notion that wolves, as predators, serve an entirely benign and natural purpose by “removing” (God forbid we go as far as to say “killing”) sick and weak animals, is based largely on a frequently quoted study of Adolph Murie’s that was first published in the 1940′s. Several things must be made clear regarding this notion and Murie’s study.

Firstly, unlike almost every other predator in the wild, wolves can, given the opportunity, kill far more than they are capable of eating. As such, they stand out compared to other predators by wasting a large portion of their kills. You can only imagine the reaction of the aforementioned objectors if they discovered their friends were buying almost industrial quantities of meat only to then consign it to the trash! Should their opinion be any different of animals that are so wasteful?

Secondly, these aforementioned coffee drinkers and pursuers of impromptu operatic performances in the wild have never seen live wolves outside of the zoo and have never been followed by them for hours on end in the middle of winter, when only a buckshot-loaded shotgun has separated them from enjoying a nice dinner after reaching a cabin or becoming dinner themselves.

Thirdly, Adolph Murie’s study has never been replicated. Replicability of a study is one of the most important scientific principals, making me wonder if that study was indeed accurate. Surprisingly, given its lack of corroboration and the many years that have passed since its publication, Murie’s study is one that continues to be zealously quoted by wolf lovers, armchair adventurers, idealists, and self-appointed authorities alike, all as if it was handed down to us mortals by the divine being himself.

Finally, searching through Russian publications often yields very different results. These studies reveal, to all appearances, that the wolves found in Russia can be much more aggressive towards humans than those in North America. There have been verifiable reports of wolves attacking humans in Russia and Russian wolf species are far less timid than their cousins across the ocean. Maybe Russians are tastier than Canadians and this is the reason lethal attacks of wolves on humans are well known in Russia. Wolf attacks on livestock, moreover, don’t surprise anyone – this is a natural part of living in rural Russia and accepted almost as a matter of course in any given year. And in some areas of Russia and several former Soviet republics, moreover, wolf attacks on humans are common enough not to make the news. Wolf hunts in Russia must be your next trip.

The take-home from all this is that Russian wolf hunts is no more or less ethical than any other kind of hunting. This is a species that at times exists in numbers inordinate to the populations of animals upon which it preys and which, at such times, poses a significant threat to humans and livestock, so much so that the Russian government even pays bounties to wolf hunters in an effort to manage the population at large.

The largest specimens of the wolf in Russia are Arctic Wolves, which are found in the northeastern tundra and may reach up to 2 meters (just under 7 ft.) from the tip of the nose to the tip of the tail and weigh up to 100 kg. (220 lb.). One specimen at the Zoology museum in Moscow stands 85 cm (33.5 in) tall at the shoulders.

The habitat of the wolf covers huge territories from the western borders of Russia to the shores of the Pacific Ocean, and from the Arctic Tundra to the steppes of Kazakhstan and Mongolia. This is the most widespread big animal in Russia. The population of wolves has been increasing steadily throughout Russia in recent decades. In 2013 a super pack of wolves – with a headcount in the region of 400 – terrorized a small Siberian village, prompting Russian wildlife authorities to encourage wolf culling.

Each wolf consumes approximately 1.5 kg (3 lbs) of meat per day. As such, a pack of 10 wolves requires 15 kg (33 lbs) of meat per day. One of the main food sources for wolves is the moose cow, which is much easier prey than moose bulls. Given that the average European moose cow weighs in at about 200 kg (440 lbs) with only about 100 kg (220 lbs) of edible meat, wolf packs must do a lot of hunting and a lot of killing in order to ensure they have adequate sustenance. As intelligent as wolves are, moreover, the fact that female cows will, in time, produce more meat for their future meals does not come into their considerations. So let’s do the math: a pack of wolves will need 50 cows, 100 red deer, or 500 to 700 European roe deer in order to last a year.

Once a pack decimates the moose population in one area, it moves to the next. One Russian proverb says “a wolf is fed by its legs”, referring to a pack’s ability to cover a distance of 100-150 km (60-90 mi) a day even in the midst of winter.

The wolf is one of the most intelligent, most socially organized, wary, and highly adaptable animals on the planet. This makes wolf hunting very difficult for us hunters. Many trophies are taken as a result of chance encounters, with the humans surprising the wolves or vice-versa. The wolf season in Russia is opened year-round, but the best time is January-February. January wolf hunts can be combined with lynx and wolverine. Organized wolf hunts, therefore, frequently rely on baiting. In hard-to-reach areas, where wolf numbers become unmanageable, helicopters or snowmobiles can be used to cull them. However, the most exciting wolf hunting is done in the European part of Russia following an old tradition that is unknown in other countries. This is termed the “flagged wolf hunt”.

On a flagged wolf hunt, when a pack is located, it is encircled with a 3-5 km (2-3 mi.) long tether that has small swatches of fabric (the flags) stitched to it every few feet. The fabric is usually red in color so it can be spotted more easily by guides against the background of snow. This tether retains human scent for several days, prohibiting wolves to come close to it keeping them within the encircled area. When wolf hunters arrive, the pack of wolves is already flagged. Therefore, the hunt must begin immediately. Preparation takes a great deal of footwork, but the success rate is very high and the experience of hunting in this manner is second to none. Four to five hunting days are usually sufficient.

TO GET INFORMATION ABOUT OUR WOLF HUNTING TRIPSCall Sergei at 1-847-962-1858 or e-mail sergei@russianhunting.com.Next hunts are scheduled for December-January-February.