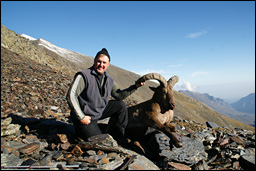 The rough warm coat of the fallen tur feels like the most comfortable pillow I could ever imagine. It had been a torturous week of climbing and waiting for a break in the weather, but finally my perseverance had paid off. Now all I had to do was make it back down the mountain alive.

Since January I had dreamed of little else, having been the winning bidder for a rather unique hunting experience at the Reno SCI show donated by Sergei Shushunov and Oleg Potechkin of Russian Hunting Agency. It was all fine and good to explain in a rather bravado manner that I was going after an East Dagestan Tur in North Ossetia. A what? my friends asked. A goat, I answered. In Russia. Near Chechnya, Georgia, Azerbaijan, and Iran. Isnt that dangerous? Isnt there a war going on there? Arent there terrorists there? they all asked. I had well rehearsed answers to all the questions, but as the time came closer, I began to wonder just what I might be in for. I hoped I was ready for this as I boarded the plane for the first leg of my journey to the other side of the planet. I had lain awake many nights worrying about this expedition. How hard will it be? It is supposed to be pretty tough. Will my guides meet me at the airport? Will the Russians let me in? How about my rifle?

As I flew into Vladikavkaz with my guide Oleg Potechkin, whom I had met in Moscow, where he flawlessly negotiated all the red tape, I could see massive mountains rising from the steppes, up through the clouds. Perhaps the Tur I was after was looking back at me? When the plane landed, we were met by a bodyguard who loaded our bags into a Mercedes SUV with blacked out windows and off we raced to the hunting compound. We met the boss, Serra, a short solid fellow in his mid fifties with close cropped hair and a Makarov on his belt. He is the chief director of hunting in North Ossetia. He explains the plan and issues the proper paperwork. Oleg and I will share a suite in the luxurious lodge looking out to the not so distant mountains covered at the moment in thick fog. From here we will head out to hunt a couple days at a time. We have not yet received the proper authorization to enter the frontier border area for Tur hunting so we will try for Caucus Chamois first.

Serra arrives early in the morning and whisks us an hour away to a small village where we meet up with our guides. The rough looking men shake hands and introduce themselves as Aslan the leader, Saslan the assistant leader, Alec, Yuri and two others. They have mismatched uniforms and old battered weapons, but look like they can run up and down the mountains all day long. We pile into a big truck filled with thick cigarette smoke for a couple hour drive. Chamois have been spotted in the next valley past some abandoned fortifications from the Georgian conflict last fall. I get out with two soldiers to climb while the truck departs dropping off men with radios and binoculars along the road to glass for goats while I scramble to get up the slope and into position. A group of chamois is spotted and I am vectored into position. With an audience of soldiers watching every move from several thousand feet below, we scramble on the shale and boulders staying low and edge slowly up ridges to carefully peer over trying to catch a glimpse of our quarry. What looks so easy from below is not easy on the mountain. 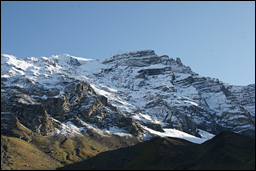 After six hard hours, we are able to see 35 chamois in a valley below us. Attempts at asking the soldiers which to shoot are fruitless. I quickly pick the best I can see and set up for a 340 yard shot, squeeze, squeeze,.. BANG! The soldiers jabber excitedly and pound me on the back. We rush to the crash site and carry the 85 pound goat down a couple thousand feet to meet the other guys who had watched from below. After pictures and handshakes it is another two hour hike back to the truck. I am enthralled at having worked pretty darn hard for my fourth chamois, a beautiful female with nice long thick horns.

The next several rainy, mist shrouded days are spent reading, napping and eating outstanding food at banquets hosted nightly by Serra for local VIPs, as well as visiting a couple local sites of interest including a visit to the site of the Beslan school massacre where September 1-3, 2004 a dozen Chechnyan terrorists held over a thousand children and teachers hostage and murdering several hundred. It is awful.

Finally it is time to hunt for Tur. My gear is stuffed into a small Kelty pack, enough for a two or three day assault on the Caucasus Mountains climbing from 4000 feet to 13,000 feet up a 60 degree incline over loose shale and ice covered boulders.

We report in to the guard detachment responsible for patrolling the mountainous border. After receiving authorization to enter the frontier zone, our truck winds its way up a narrow dirt track ending at a bunker with a machine gun and two soldiers. We proceed on foot. The path is very rough and tangled, once a road carved into the hillside but after hundreds of washouts and rock slides it is now a treacherous obstacle course. I enjoy the hike which ends at a hot springs near the face of a large glacier. It is bright, sunny and about 60F.

Then starts the hard part. Aslan indicates the top of the mountain towering overhead. The climb is easily the most strenuous physical endeavor I have ever undertaken. The mountain is very rough, with rolling rocks, slippery moss, and hidden crevasses. As we get higher, it gets colder, windier and steeper. Ice and snow cover the hellish terrain. Each false peak is a spot to rest and gather strength for the assault on the next section. I discipline myself to keep moving. As we continue to ascend, I can feel the reduction in oxygen. We eventually come to a cave where some meager supplies are stashed and collapse into our sleeping bags. It is terribly uncomfortable and I sleep very little. 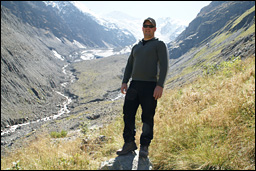 In the very early morning we must ascend another 1,500 feet, rushing to get into position before the Tur arrive when the sun rises. Right on schedule Aslan and Saslan spot a group of Tur making their way toward us. The guides are slightly higher than me and can see over the ridge and across the canyon, but I cannot. I hope and pray that I will I get a shot. The time comes. Aslan motions for me to get ready. I cannot see my target yet, until suddenly I see a small band of Tur moving rapidly up the next peak. I pick the largest horns in the group and get ready to shoot. It is 380 yards, 10F, 15mph cross wind, down angle 25 degrees and 13,000 feet elevation. I concentrate and gently squeeze the trigger. The massive report surprises me and I see big burly goats running all over. I lost sight of my target, but Aslan hollers and points. I aim again and try to get the right animal in the crosshairs. I cannot tell. Wait, there my Tur! Bleeding from a hit a bit far back, limping badly, now at 450 yards and running. Another two shots follow, almost certainly off the mark. Aslan scrambles off in a hurry with his rifle. He moves in 20 minutes what would have taken me well over an hour. He speaks excitedly over the radio, but Saslan who does not speak English can not tell me what is going on, so I am left to guess. Oleg has made his way to me and translates that Aslan found my Tur dead. We shake hands and then work over to the fallen Tur. I am extremely excited. Thank God for helping me to be strong enough to do this hunt. I lay down on the animal hugging the 250 pound body. What a magnificent beast! 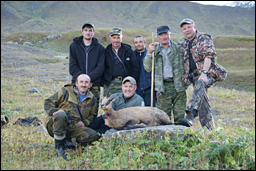 Aslan slaps me with his hat and then slaps the Tur, as a show of respect and honor for the hunter and the sacrifice of the ram. Oleg takes pictures of me and the Tur and then it is time to get moving. The going is so treacherous that I soon have a terrible headache from the stress of picking foot positions and taking chances as I descend. I make slow but steady progress and relish the thought of a drink from the icy streams below. For ten hours I tediously descend struggling to stay focused so I do not end up hurt or dead. When I finally reach the bottom, I am spent. I lie back and concernedly watch the others come down carrying Olegs slumped body. He fell into a rocky ravine badly injuring both of his legs. Alec and Yuri stay with Oleg and keep him as comfortable as possible while the rest of us hike out loaded down with several hundred pounds of meat, trophies and supplies. Aslan races ahead to get a horse for Oleg. Several hours later the horse returns with Oleg and Aslan and we all clamber into the truck to get Oleg to the hospital in the early morning hours. I return to pack my things at the lodge, glad the hunt worked out, but worried about Oleg and what I will do if he is unable to get me safely out of the country. I thank the guides who are eager to get home after a treacherous test and participate in one last Vodka toast.

Several hours later with two casts and a shy grin, Oleg and I ride to the airport in an ambulance. The gun paperwork and customs emigration is a horror show of red tape, but eventually all the officials get their rubber stamps in the correct locations and I am free to leave Russia.

On the way home I reflect that I am not in a real hurry to repeat my Caucasian adventure any time soon.well, until the next time when I have forgotten all the hardships and can only remember the glory of the Caucus mountains and my magnificent East Dagestan Tur.