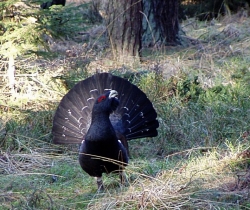 Hand in hand at 4:15 a.m., in the middle of the Russian forest, we make two more steps towards the sound and freeze again. Pop! but nothing follows. For some reason the bird froze as well. There is no sound for several minutes. But he is close. I can hear him well, perhaps 50 or 60 yards in front of us, in an island of pines growing on slightly elevated ground. We can’t move, or he will spook. I am virtually standing on my left foot with the right one tangled in some brush. Very uncomfortable. My left thigh is half numb, and I am ready to give up when the “pops” start anew and, more importantly, the bird is “honing” once again. We wait through two or three cycles, to let him get hot again, before resuming our “two-step” dance. A few minutes later we are on him, only some 25 yards away. I can see him two-thirds of the way up the tall pine, just to the right of the trunk. Or can I!? Is it my bird, or is it a clump of branches? I can\’t really tell, despite the sky being quite light. Worse yet, he stopped calling again. I move my head ever so slightly, trying to silhouette him better. This certainly does not please Volodia, my Russian guide, who squeezes my hand so hard I could have screamed. It means: “DON’T MOVE!” Luckily Mr. Bird goes at it again, and when he “hones” he twists his head so I can see the movement. I mount the shotgun and switch off the safety during the next “hone.” But now I don\’t see the bird. I swing to the right a little, where there is a bit of an opening between the branches, so I can dry aim at the light sky. Then, without losing composure, I swing back on the bird. All this takes place while he is deaf “honing.” It took three song cycles. The last …khreeeee. He doesn’t hear the shot. It is the most beautiful grouse in the world, only the third of my life! The king of birds. The only bird considered big game. The mighty Capercaillie! It is now 4:50 a.m. on May 1st, 2004. Is there enough time to get ready for the May Day parade? We are in Russia after all. Ah, yes, but Russia is different now. There will surely be a parade somewhere in St. Petersburg today, there are still old diehards in this and other countries who celebrate this infamous day. I remember the times when I, as a schoolboy, also had to march on this day albeit in different country. But now we will celebrate with a breakfast of scrambled eggs and “Russian Standard” vodka. Perhaps even more, if Loubert and Jim are lucky on their stalks.

Capercaillie (Tetrao urogallus), the largest grouse in the world, can be found in the northern and eastern parts of Eurasia. An adult male may weigh up to 4 kg. It has a dark, chocolate-colored back and wings, a metallic green shield on the breast and neck, white markings on the wing and tail, and very prominent crimson-red brows. During its mating season in communal territories, called leks (from the Norse word meaning “to dance”), males display specific behavior aimed at attracting females. Its body language, not unlike our wild strutting turkey, and especially its mating song are the sight to see and the sound to hear. Perched in a tree, but often from the ground as well, the bird displays its mating call and behavior. The song consists of four parts that are audible to the human ear. Recent studies also suggest that parts of the call may be subsonic, though still very much audible to hens. A series of tapping and gurgling sounds accelerates to a drum roll (the Gaelic “capull-choille” means “the horse of the woods”) that sounds like the rapid pulling of corks from numerous bottles and culminates in the fourth phase, which is sometimes called “honing” because it resembles the sound of sharpening a very dull knife on wet stone. This is the phase that makes stalking the bird possible, for while “honing” the bird becomes totally and completely deaf for just a few seconds, allowing the hunter to make two quick steps forward in the often dense and always pitch-dark woods. Hence the Slavic name for the bird (in Russian it happens to be Gluhar) meaning “the deaf one.” The entire call is rather quiet, but the trained ear of a guide can pick it up from great distances, sometimes from several hundred meters away. None of us could hear it from more than a hundred yards away and that was only after we had heard a few songs. It is therefore important to mimic the guide\’s movements exactly while stalking or jumping; often a hand-in-hand \”dance\” is the only way to proceed with a novice hunter. But it certainly must look funny to an observer, had there been one. Just picture a couple of often respected and usually adult males holding hands and doing a \”two ste” in the middle of the swampy Russian woods at the unfair hour of 4 a.m. To make things even better, one of the guys is holding a shotgun in his free hand! (To be sure, Loubert did try to hire a female guide, but none volunteered.) Once a bird is located in a tree, the hunter may enjoy its call for a while and catch his breath. Shooting should occur during the deaf phase for practical as well as ethical reasons. Often what is perceived as a bird up there is actually a clump of small branches, a tree fungus, etc. If one shoots at random, the bird will certainly spook, but there is a chance that he may not if one waits to shoot until the bird is “honing.” Then the bird will not even hear the shot!

The three of us, Dr. Jim Felli, Dr. Loubert Suddaby and I, were in Russia, about a four-hour drive northeast of St. Petersburg, outfitted by the Russian Hunting Agency, with a U.S. base agent, Dr. Sergei Shushunov (https://www.russianhunting.com) stationed in the Chicago area. The season is just short of three weeks every spring. We stayed in a very comfortable and well-equipped, two-story log cabin with all the necessary amenities. Very good home-cooked meals are provided by one of the local women. We were picked up at St. Petersburg airport upon our arrival and, after a painless customs and guns check, we were driven to the hunting area. After a nice meal and introductions, we began hunting that very evening. Game wardens of the region served as our guides they were efficient and knowledgeable. A pretty young lady, a translator, was in the camp during the entire hunt. The usual day would start at around 2:00 a.m. when we would drive to general hunting areas for approximately 20 to 30 minutes. From there we would walk separately into the woods for about an hour or so, into a previously scouted roosting area, and then listen for the birds and stalk them. We were back in the camp by 6:30 a.m., ate breakfast and slept until noon. Then we had lunch. By 4:00 pm, we would be out trying to shoot ducks on the river and swamps. From there, after a short siesta in the woods, we would hunt European woodcock during their mating flights until 11:00 p.m. or so. Woodcock hunting in the spring is a different experience altogether, as one shoots them flying erratically, silhouetted on the light sky. The males fly around making a certain snorting noise, trying to alert the ground-based females, who then lift in flight for the mating ritual. And so one listens for snorts first and then tries to locate the bird somewhere overhead. It is difficult, fast shooting! By midnight we would be back having dinner, then a short snooze and back to the woods by 2:00 a.m. Somehow it was not too tiring, probably because of the time difference for us.

Capercaillie was, of course, the primary target. But once fulfilled we were hunting blackcocks (tietiery in Russian), which are as plentiful as the capercaillie. In fact, the population of both species has increased in the past several years, despite increased hunting demand. Every morning I heard several capercaillies singing in any given area. Blackcock is hunted at first light on the huge swamps (muskeg), with the hunter strategically placed in a small “hut.” These mighty black knights fly into the swamp long before the light and start their beautiful mating fights, making so much noise with their vocal cords, flapping wings, etc. that it is quite easy to locate them and then choose one or two as a trophy. But if there is any noise from the hut, they are gone in an instant. It feels almost sinful to interrupt this feast with a shot.

After the last day of the hunt we were taken back to the hotel in St. Petersburg and then to the internationally renowned taxidermist with our birds, which had been frozen solid at the camp. The next few days were full of unforgettable sights of the city, known to this day as the Venice of the North. The Winter Palace, which now houses the Hermitage, and the battle ship Aurora, from which the first shot was fired that started the communist revolution in 1917, were only a few of the many attractions available to us. One afternoon was dedicated to the riches of Peterhoff on the Bay of Finland with its famous gardens, fountains and art collections. We were even lucky enough to see “Swan Lake” in the world-class Mariinsky Theater. Outstanding!

We all vowed to come back for some more hunting and cultural excitement!