John Fitch won the Sharp Man Contest at the 14th Annual Batson Bladesmithing Symposium with the “Hog Body.” The 10-inch blade is two pieces of 1/4-inch-thick and 1 1/2-inch-wide 1084 welded together. This knife belongs to one of Fitchs customers and is the “test rig” model with the grip unfinished for enhanced handling. Johns list price to make a similar piece is $700. If you prefer the same model but with a finished handle of fiddleback maple, his list price is $800.

As big John Fitch, ample “Hog Body” knife in hand, raised what one wag called his “50-pound arm” to deliver a Bunyonesque blow on the suddenly meager-looking 2×4, a hush fell over the crowd. With one of Fitchs mighty swings, half of the 2×4 seemed to disintegrate. Anothercouple of quick, forceful blows and the board was cleaved in two all in a record time of 2.79 seconds! The onlookers gasped, cheered and oohed and ahhed, applause punctuating the brisk early April night air.

The scene was the “Sharp Man Contest,” the cutting competition of the 14th Annual Batson Bladesmithing Symposium & Knife Show at Tannehill Ironworks near Bessemer, Alabama, one of many highlights during a weekend of seminars on pattern damascus forging, locking liners and automatics, sword polishing, engraving, scrimshaw and much more. Taught by an all-star lineup of instructors including Don Fogg, Melvin Pardue, Steve Schwarzer, Ron Newton and others, the symposium and knife show drew blade-smiths, knifemakers and attendees from around the country and as far away as Great Britain.

While the main focus of the symposium is educating one and all on bladesmithing and spreading the good word of hammer forging to as many people as will listen not to mention everybody having a rip-roaring good time the Sharp Man Contest has become an event unto itself. Though there were no losers, Fitch and his “Hog Body” knife was the overall winner in the colorful competition, which included 20 contestants and their knives with equally colorful names, including “Boleyator,” “Pod Knocker,” and “Beaver Cleaver.” Robert Rossdeutscher and Adam Waldon finished tied for second, with Rossdeutscher breaking the tie by winning an exciting “chop-off.”

As entertaining as the cutting competitions are, they have been characterized by some more as tests of the contestants strength and technique than that of the blades cutting ability in reality, they are tests of both and have drawn more than their fair share of criticism.

Addressing the critics are Jerry Fisk and Mike Williams. The two ABS master smiths constantly fine tune the different tests in the contests so that they gauge a range of different aspects of both the knife and the contestants cutting and chopping abilities.

For example, the tests for the Batson cutting competition consisted of, in sequential order:

1) Cutting a water-filled soda can lengthwise from top to bottom;

2) Cutting through a hardwood dowel 5/8 inch in diameter, the key being to cut through the dowel at a narrow spot marked by a piece of duct tape approximately 1-inch wide (10 points were awarded for cuts through the tape and dowel, five points if through the dowel but not the tape);

3) Sticking the blade point first into styrofoam balls floating in a tub of water (judged by depth of penetration);

4) “Rope on a string” cutting a 16-inch length of l-inch-diameter sisal rope in half thats in turn hanging from two pieces of upholstery thread, without breaking the threads, and;

5) The 2×4 chop (judged by how quickly its done, with 10 points for first place, five points for second and three points for third).

One additional, and very important rule: If the edge of the blade “wrinkles”meaning its too soft or too thin, or chips out, indicating its too hard or too thin in any of the tests, the knife and the contestant are disqualified.

To keep the contestants on their toes, Fisk and Williams instituted a change for the Batson cutting competition. The soda can had to be cut from top to bottom rather than from the side as usually is the case in Sharp Man Contests. The unexpected “curve ball” is an example of how Fisk and Williams keep the competition interesting and keep the contestants guessing in the blades they prepare for the cutting tests. Even without the curve ball, the tests in and of themselves require blades that must be versatile in terms of edge geometry and sharpness, and require the contestants to demonstrate a variety of cutting abilities, including strength, quickness, accuracy and finesse. 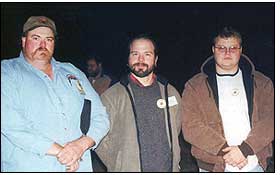 The Tests & Results
What does each individual test show about the knife and contestant? Cutting the water-filled soda can came first. According to Fisk, its a reflection of the blades sharpness and geometry, as well as how quick the contestant is with the cut.

For the uninitiated, edge geometry refers to how the blade is ground, i.e., convex, flat, hollow, etc., as well as how thick or thin. “Edge geometry is the single most important thing on the knife (for the Sharp Man Contest). Its more important than the steel, hardness or anything else,” Jerry related. “You can take a so-so steel and grind it up correctly and it will do well, and take a good steel with a bad grind and it wont work as well.” Sharpness, meanwhile, is a barometer not only of how well the blade is honed but whether its been properly hardened. “What we look for is a clean cut and no tear (of the can), which shows better sharpness and geometry,” Fisk observed.

Why the change of the angle of the cut from the side to top to bottom? “Blades that are a little too hard or ground too thin will chip out. The sideways cut shows the blades geometry but the cut from top to bottom shows the blades hardness as well the geometry,” he explained. “If its a little too thin or hard, (the can) will bite (the blade). The rolled edge of the can is thicker and harder than the side. We disqualified three contestants in that one test. The first time we tried it, we lost 60 percent of the contestants. Nobody was expecting it at Batsons.” Only three of the non-disqualified contestants Ray Kirk, Rossdeutscher and Waldon were able to complete the cut successfully.

Next was the dowel cut. It gauges edge geometry, sharpness and cutting accuracy “Keeping the cut in the tape tests your ability to use the knife” Fisk noted. It focuses the cut not only on a smaller medium but also on a smaller area of the blade. The 2×4 test spreads the cut out over a wide area. Not so with the localized nature of the dowel cut. “If the blade is too thin, (the dowel cut) will wrinkle the edge,” he said. Moreover, the hardwood dowel is harder than the pine 2×4. “If the edge is soft, it will flex and bend in the dowel cut when it might not in the (2×4) cut,” Jerry added. Seven of the non-disqualified contestants James Gibson, Wes Byrd, Marvin Foxworth, Harry Brock, Bruce Evans, Rossdcutschcr and Fitch were able to cut through both the tape and the dowel.

The 2×4 test was next. It gauges edge geometry and retention, the balance of the knife, handle design, and the strength and technique of the contestant. “Its the only brute-strength test,” Fisk observed, adding that its winner doesnt necessarily always prevail in the overall competition, though Fitch did in this instance. Johns time of 2.79 seconds broke his old record of 3.15 seconds set during a Sharp Man Contest at the annual Bill Moran School of Bladesmithing Fall Hammer-In. In addition to Fitch, the second-and third-place finishers were (their times in parentheses) Gibson (9.69 seconds) and Kirk (10.13 seconds)

Next was the styrofoam ball test or a bladesmith version of “bobbing for apples,” as Jerry calls it a gauge of the geometry of the blade tip and wrist dexterity. “Blunt points dont get the job done,” he said. A flick of the wrist rather than holding the knife straight up and down and trying to stab the balls works better, Fisk noted. The top finishers, with the depths in millimeters to which their blades penetrated the styrofoam balls in parentheses Steve Van Voorhees (48 mm); Mike Bauer (38 mm); Fitch (30mm); Byrd (27 mm); and Harold Herron (25 mm).

Last was the “rope on a string”. Its the “toughest test out there,” Fisk maintained. Thc results would seem to bear him out, with only two contestants Herron and Waldon able to cut the rope without breaking the string. It gauges sharpness, edge geometry and the speed and cutting skill of the contestant. “We always have the rope on the string after the can cutting and 2x4s to see if those tests took the edge off the knife,” Fisk related.

As noted, in addition to testing thc blade and the contestant. the competition also is a great gauge of the geometry and shape of the knife handle. “(Every contestant) tweaks their handle for speed and comfort,” Jerry said. “Weve had people whose hands were bleeding or blistered after the event because the handle was too rough or sharp edged. How I came up with my finished camp knife design is by doing tests like these.” In a nutshell, the Sharp Man Contest forces the makers to use their knives, which can only result in blades that perform better for you, the consumer.

For more information on the ABS cutting competitions contact Jerry Fisk, Dept. BL8. 145 N. Park, Lockesburg, AR 71846; (870) 289-3240. To enter a knife in such a competition, you can use only onee piece and it must be of your construction. The blade can be no longer than 10 inches and the overall knife length cannot surpass 15 1/2 inches. The knife must have one visible pin and a hole far a lanyard. The Sharp Man Conte5t at the Bill Moran School of Bladesmithing Fall Hammer-In accepts a much wider range of blades than most, from swords to axes. For more on it contact Fisk as well. There also will be cutting competition at the 2nd Annual Scagel Blade Forging & Knife Exhibition Aug 23-25 ill Muskegon, Michigan and the ABS New York Blade Forging & Knife Exhibition Sep. 26-29 in Nassau, New York. For more on them as well as next years Batson Bladesmithing Symposium & Knife Show, contact Jim Batson, Dept. BL8, 176 Brentwoad, Madison, AL 3575B; (205) 971-6860.