As if on cue, the wind finally began to settle and patches of misty fog slowly began to rise from the damp grass that surrounded my stand. The sun had already settled over the western horizon as I subconsciously began to reconstruct what had brought me more than halfway around the world to this desolate land in northern Russia. It was my first evening hunting Eurasian brown bear over a field of wild oats north of Vologda. I must admit, as the light continued to fade with nary a bear in sight, I even began to contemplate whether the thousands of air miles, the 12-hour overnight train ride to Vologda from Moscow, and the seemingly endless miles of bad roads that we traveled north of Vologda just to access the hunting area, were worth all the effort. Then, seemingly out of nowhere, a bear with a head the size of my granny’s old washtub, stepped out of the dark shadows that had already shrouded the edge of the timber. 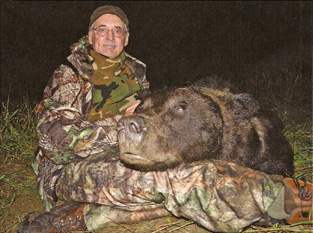 Eurasian brown bear, that can on occasion attain the size of an interior North American grizzly, were formerly found throughout all the forested lands of Europe but are not primarily found in Russia, Romania and the former Yugoslavia. Although smaller numbers can still be found in Norway, Sweden, Finland, the Czech Republic, Hungary, Poland and Bulgaria. Countries such as Spain, France and Italy retain but remnant populations. Russia, however, is the big winner with an estimated population of 30,000 – of which our hunt area north of Vologda is said to have some 500 bears.

While the Eurasian Brown bear averages about 6.5 to 7.5 feet with a weight of 220 to 600 pounds, it can attain a length of eight feet and a weight that exceeds 600 pounds…which, of course, is the size that I had my sights set on. The males are very territorial and can be hunted by baiting in the spring or by breaking into their dens in the winter during hibernation, unquestionably a very dangerous and exciting hunt for anyone willing to give it a try. But for me the most attractive approach to hunting these bears is when they are hunted in the fall out of high stands over wild oat fields. It was, undoubtedly, one of the main reasons I chose to hunt this particular species of bear. The other, was my longstanding desire to visit Russia and when I found that I could combine a bear hunt to this vast and diverse land with a hunt for monster wild boar, where mature males run between 440 and 660 pounds with tusks that can push 12 inches, I dug out my cheque-book and booked a hunt. I have hunted wild boar all over the world but never in their native homeland so, despite the reduced odds of success in Russian which I understand is due to the tough winters and deep snows that allow only the biggest boars to survive, I just had to include them in the hunt.

Heading to the Other North

After considerable research, I booked my hunt through the Russian Hunting Agency for the first eight days of September. The owner of the company, Sergei Shushunov who lives in Illinois had excellent references from his former clients. I considered this timing about ideal to take advantage of hunting these bears over ripe oat fields at a time when their hides would be in pretty decent condition. As it turned out, I was right on both counts. 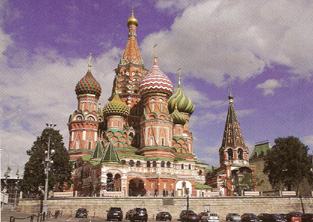 After a long and arduous flight Sergei Leovin, who was to be my field manager and interpreter, met me in Moscow. I then spent the next couple of days touring Moscow with numerous stops at historic sites that included both the Kremlin and Red Square. An opportunity not to be missed; neither being as formidable as I had imagined. Then prior to our overnight train to Vologda, we were joined by Ken Jayne from Houston, Texas who was to hunt out of the same camp as I. Ken, as I discovered, was on his second hunt for Eurasian brown bear having hunted unsuccessfully in the St Petersburg area the previous year. So it was with a degree of optimism that we were both introduced to the guides and camp staff at Babaevo Lodge. I must admit, however, that at first glance this new five-star lodge looked totally out of place situated as it was in the very heart of a small northern Russian village that with its antiquated log homes and earthen wells looked as if it might have been used as a set for a film based on the eighteenth century.

We spent little time storing our gear in the lodge before heading off once again still further north on roads that were mere trails through forests and occasionally opened up into primitive agricultural lands. Despite this terrain’s overwhelming resemblance to what back home would have been ideal black bear habitat, chief guide, Alexey Larionov, assured me that we were entering the very heartland of Eurasian brown bear country.

For this hunt I had worked up a load for my Tikka T3 that would consistently put three-shots into a -inch at 100 yards. Simply put, a great load for this particular hunt and I was most relieved to see after a quick en route check of the rifle that it had not suffered during the long flight. I was now more than ready for the hunt to get under way.

Two hours later we finally arrived at a small agricultural area of mixed hay fields and heavy timber where I was introduced to Alexander, Alexey’s brother, who was to drop me off at my stand. The two brothers have been hunting bears in this area for over forty years and no doubt knew it better than their own back yard. More than likely they considered it their backyard.

After yet another series of back roads, we eventually broke out into a large open field with an elevated stand situated right in the middle of it, some 150 yards from the edge of solid timber. As I climbed the stand, I could readily see the patch of wild oats than ran right along the edge of the forest for about 170 yards on either side of my stand. It looked like a great location, as no matter where a bear might enter the oat field the maximum distance of any shot would be less than 170 yards. With definitive instructions to remain absolutely still and motionless, I bad farewell to Alexander at about five o’clock and settled in for the wait. The wind was relentless and despite three layers of clothing, I soon began to feel the desire to move simply to regain some body heat. But I hadn’t travelled this far to spoil any chance that I may have had for an “early in the hunt” bear, so I hunkered down as best I could and continued my evening vigil. The sun finally dropped below the western tree line at about quarter past eight with still no sign of any bears. But I remained steadfastly confident, as the area looked just too promising not to remain vigilant. At about nine, with the light in relentless remission, I decided to reduce the power on my scope to its lowest setting of 3.5x. Within minutes I was more than glad that I did.

About 20 minutes later, the bear I had been waiting for ambled out of the shadows and into my line of sight. I knew that I had mere moments to make my shot, as what little light was left was fading fast and this big bruin was on the move and would soon disappear back into the shadows. Unfortunately, when I attempted to find the cross hair in my scope, it completely disappeared against its black hide. Where was my lighted reticle when I needed it? Not only was I facing a vanishing reticle but the bear, at this point, was at an angle that would have made a shot most hazardous. Under these light conditions and at that time of day, I can assure you I didn’t want a wounded bear on my hands, so I quickly steadied my resolve and waited for it to turn slightly more broadside. Which, thankfully, after a few more strides it did. I then raised my rifle directly over its hump until I could once again clearly see my reticle and then lowered it directly down the line of its shoulder until I felt I was on target and squeezed the trigger. The bear went down in its tracks; the bullet had precisely found its target. As I’m not one to take chances with a bear of this size, I quickly followed up with another shot. I discovered later that that second shot would not have been necessary but the old adage of an ounce of prevention is worth a pound of cure was, I think, warranted here. 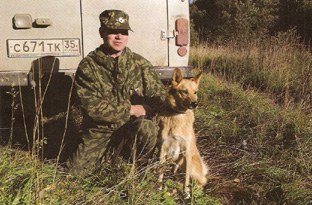 Within minutes I saw the lights of Alexander’s vehicle heading straight for my stand. He had no doubt heard the shots. As soon as he arrived, he jumped out of his vehicle with a most excited expression and, despite our language barrier, I was able through hand signals to quickly describe that I had a bear down and roughly its direction. He immediately turned his bear dog loose and it began to sweep the area for scent. These dogs are a marvel at finding dead or wounded bears, so when it returned to its master after an initial foray, my heart skipped a beat. But on its second sweep, it soon began a series of high intensity barks that quickly evolved into all the aggression it could muster on my dead bear.

We headed straight for the dog and as I walked up on this bear, I can assure you my heart skipped a few more beats, as I could immediately see that this was one monster bear. It was so big that Alexander and I could not even roll it over. I then noticed that its right lower canine tooth was broken off and thatthe sides of its head were badly scarred. This was one old bear. When I asked about the scarring, Alexander explained through Sergei, that the facial scarring occurs when an old male with a wide head such as this travels through the heavy timber it simply rubs off the hair, which over time leaves these scars.

What a bear! When the other members of our hunting party showed up, five of us attempted to lift this bruin into the back of Alexey’s vehicle but we were collectively stymied as we could not even lift it off the ground let alone get it into the back of his vehicle. Eventually, Alexander cut a bunch of poles and we rolled it up into the back of his vehicle on these poles. How much it weighed I have no idea but its front pad was seven inches wide and its rear pad was longer than Alexey’s size 10 boot. It squared eight feet with a greek skull that measured just shy of 25 inches but Sergei summed it up best when he said, “Mark, you know that bear you shoot, it is a very big bear for this area.” I knew he was right.

Unfortunately, the weather and a bout of the flu were contributing factors to me not fulfilling the second part of my adventure as nary a big Russian boar did I see. But as we say “that’s hunting” and who was I to complain after an adventure such as this. The trip to mother Russia and the stoic culture of its people will certainly live on forever in my memory, as will this great bear.